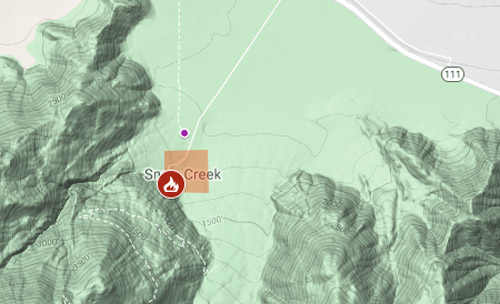 A fire that began Thursday afternoon in the foothills near Palm Springs grew to 1,200 acres within five hours and prompted the evacuation of the community of Snow Creek.

As of 8 a.m. Friday, the Snow Fire had reached 2,500 acres (4 square miles) with no containment, the Riverside County Fire Department said.

The vegetation fire was reported around 2:30 p.m. off Snow Creek Road, and the community of about 20 homes was ordered evacuated in the early evening.

Snow Creek is 8 miles northwest of Palm Springs. The Pacific Crest Trail passes through it on the way from the San Jacinto crest to Interstate 10 near Cabazon.

A warning was issued for the Cove and Santiago Sun Canyon neighborhoods, off Palm Canyon Drive to the east.