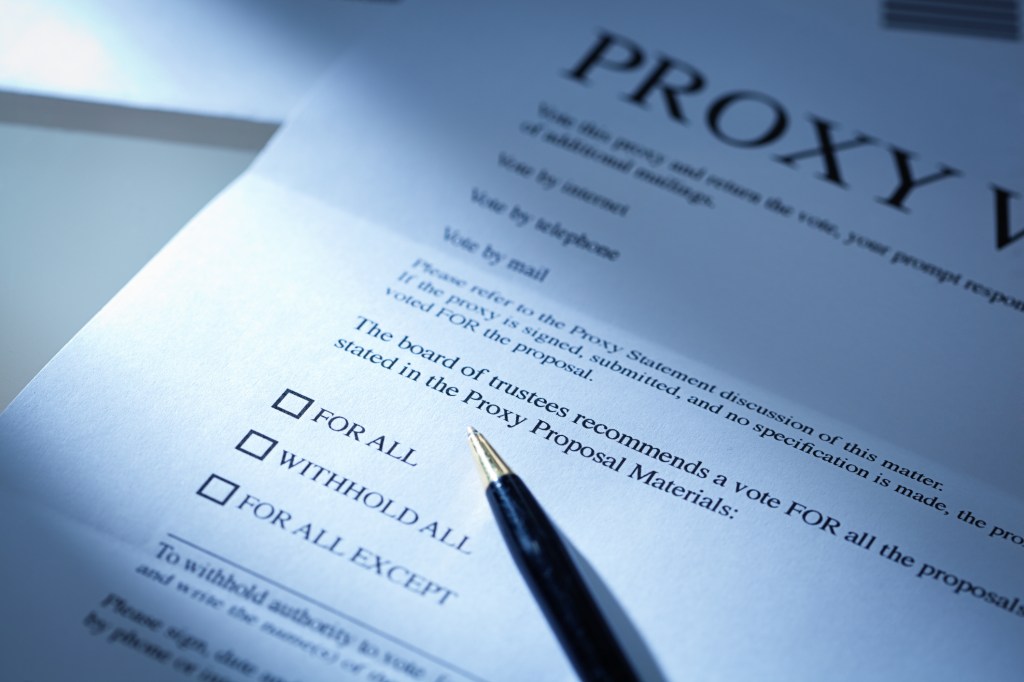 Proxies are still used in most HOAs and continue to contribute to confusion and controversy during association elections.

A proxy is a document by which one association member authorizes another member to vote for them. Unless banned by governing documents, proxies are allowed in HOAs under Corporations Code 7613 and Civil Code 5130. However, there is no such thing as a “board proxy.” If a director is not participating in the meeting, they cannot have another director vote for them.

There are three types of proxies — the directed proxy, the general proxy and the quorum-only proxy. Directed proxies instruct the proxy holder how to vote, while a general proxy allows the proxy holder to vote as they see fit. A proxy for quorum-only purposes is self-explanatory, in that the member does not wish to vote or to give their vote to someone else but desires to help the association attain quorum.

The legal requirements for a general proxy are very simple, and that is where the problems begin. Per Corporations Code Sections 178 and 7613, a proxy need only express that a member authorizes someone else to vote for them.

Section 178 requires proxies to be “signed” by the maker, although the definition of “signed” is much broader than simply a signature. By implication, the statute requires proxies to be dated. A proxy could be written on a scrap of paper. Some associations establish an “official” proxy form, but this often creates disputes since any member can submit their own proxy so long as it meets the minimum legal requirements.

Civil Code 5130(a)(1) adds another simple limitation — a proxy may only be given by a member to another member (not a relative or tenant, for example).

Some special voting subjects, such as recall or ratifying contracts with a director, must be mentioned on the general proxy for it to be usable on those issues, per Corporations Code 7613(g).

Proxies expire by the terms of the proxy unless they have no stated expiration date and then automatically expire in 11 months. A proxy cannot state an expiration date longer than three years.

A member can revoke a proxy at any time by either casting a ballot before the proxy holder does, issuing a later-dated proxy or by writing a note of revocation.

Proxies create many potential problems in the election process. There is no reliable way for election inspectors to confirm the date or validity of a member’s signature. Some members play games with proxies, leaving dates blank, or collecting them under questionable circumstances. Proxy issues are one of the most common HOA election dispute issues.

Proxies are unnecessary since members have at least 30 days to cast their ballots in an “absentee” fashion. There is no need to transfer one’s voting rights. Consider amending your association’s bylaws to only allow quorum-only proxies and ask your HOA attorney about this.