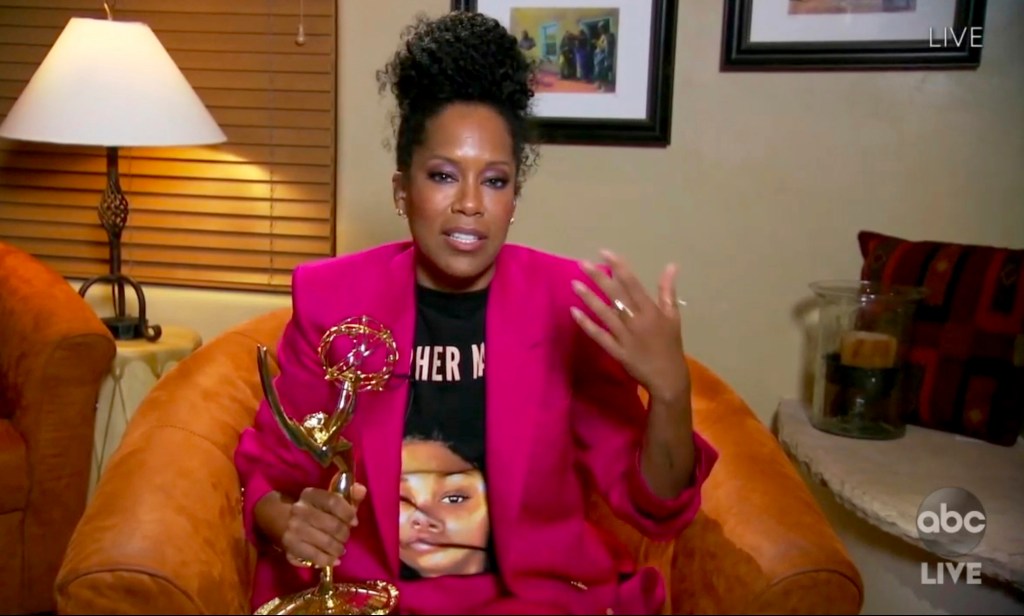 With the 72nd annual Primetime Emmy Awards underway on Sunday, September 20, winner Regina King used her acceptance speech to spread a message for the audience and nominees watching at home.

After winning the award for outstanding lead actress in a limited series or movie for her role in HBO’s “Watchmen,” the actress wore a shirt with the face of Breonna Taylor, the EMT whose killing by police helped spark protests across the country.

The actress’s speech encouraged people to vote, to “be a good human” and a special dedication to Supreme Court Justice Ruth Bader Ginsburg, who died Friday. People on social media were celebrating King’s win and this what they have to say:

Regina King Wins an #Emmy for Watchmen & reminded everyone to Vote while wearing a t-shirt with Breonna Taylor and paying respect to RBG 🙌🏾 #Emmys2020 #BreonnaTaylor #RIPRBG #ReginaKing #Emmys pic.twitter.com/qD1Xf8KZsY

Regina King’s performance in #WatchmenHBO is one of the best this decade and last. She only had one shot at the win; good to see the #Emmys get it right!

Was rooting for Shira Haas but can’t be mad about Regina King. #Emmys

Regina King winning an Emmy is so great and deserving. Her recent Oscar win was super deserving too.

Regina King Wins an #Emmy for Watchmen & reminded everyone to Vote while wearing a t-shirt with Breonna Taylor and paying respect to RBG 🙌🏾 #Emmys2020 #BreonnaTaylor #RIPRBG #ReginaKing #Emmys pic.twitter.com/qD1Xf8KZsY

The winner of Best Actress Emmy is Regina King for WATCHMEN! She accepted the award wearing Breonna Taylor t-shirt, urged viewers to vote and ended her acceptance speech with “Rest In Power RGB. (Octvia Spencer did not win, but was truly brilliant as Madam CJ Walker.) #Emmys

I only finished #WatchmenHBO two weeks ago and I loved it. So seeing #ReginaKing win the Outstanding Lead Actress in a Limited Series is great. Her scene where she sees a certain character perish in front of her and emotionally breaks down gave me chills. #Emmys pic.twitter.com/Q1h7bUYmkb

Now THAT was a speech. Thank you @ReginaKing