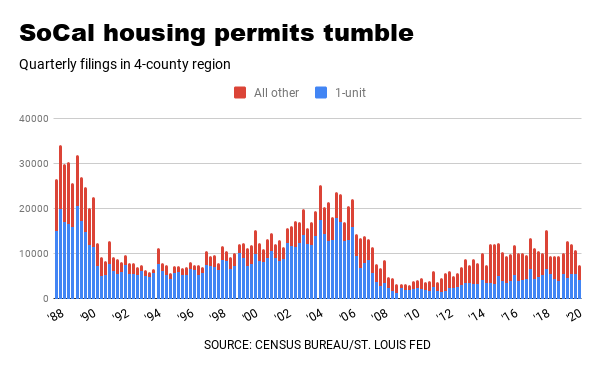 “Stay at home” orders designed to slow the spread of the pandemic made home selling and construction tricky. At the same time the broad economic fallout from business limitations made consumers antsy and led many builders to take a cautious approach on new projects.

Builders filed 7,505 permits in the four counties during the quarter, plans for both ownership and rental properties. That’s down 27% in a year and the slowest three-month period since the end of 2012.

That pullback is understandable when new-home sales in the spring quarter were down 13% in a year to 3,419 across the four counties. Still, that was a far smaller dip than closed purchases of existing homes: down 34% to 30,105.

This short-term business logic won’t help Southern California’s chronic housing shortfall. But recent reports by local builders of jumps in orders for future housing in the Inland Empire suggests that home construction may be rebounding soon.

Builders in Riverside and San Bernardino counties got 26% more signed sales contract in June vs. a year earlier, according to Meyers Research. But in Los Angeles and Orange County pending sales fell 19%.

“The housing market in the Inland Empire is stronger than the local unemployment rate would suggest due to more people working from home,” says Meyers analyst Ali Wolf. “Many have realized they can get more bang for their buck by moving inland as long as they aren’t planning on commuting every day.

In Los Angeles and Orange counties, Wolf says builders face the loss of Chinese buyers who favored luxury new homes plus the region’s high land costs that make selling lower-priced housing “as challenging as ever.”

Here’s how second-quarter permits for one-unit housing, a benchmark for single-family home sales, looked in the region …

And here’s at look at total permits filed, which includes everything from single-family homes to condo projects to units in apartment complexes, in the April-to-June period …